Cancale is a little fishing village between Saint Malo and Mont Saint Michel, at the Bay of Mont Saint Michel. Although the village offers a nice beach and great sailing and water sports opportunities, there is one main reason to visit Cancale: Oysters.

This is one of the most famous places in France for Oysters and if you are in the area, you should consider visiting to try some fresh Oysters. In travel guides the “market” at the Porte de la Houle is recommended and this is where you might want to go: one word of warning though: it´s not a “posh” market, but just some tents with fisher men and women selling Oysters. You will get a dozen for about 5-6 Euros and they will open the Oysters for you. Then you take a sit at the harbour wall, put some lemon sauce on your oyster, cut it through and get them down.

For beginners, like me, you might want to go with the smallest size and aim for half a dozen.

I liked them, but I am not really convinced about the hype about eating Oysters. 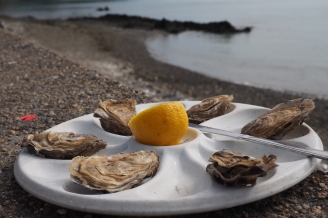 Half a dozen Oysters, ready to be eaten.

And down they go …

You can eat them with a view over the bay of Mont Saint Michel.

More pictures from Cancale can be found at our german speaking Blog, wundrig.at !

A day at Mont Saint Michel

I am currently on vacation in Saint Malo, in the french region of Bretagne. One of the main touristic attractions of this region (and of France) is Mount Saint Michel, an old abbey set onto an Island in the Bay of Saint Michel.

You can visit Mont Saint Michel per car, or take, as we did, busses and trains – I do not advise to do so, as it was rather difficult to do so, as the french company, that organizes this (Ligne Baie) was not organised at all, and left people behind after the bus was full (and they were aware of that in the morning).

Mont Saint Michel itself is a gem and a great place to visit and I do advise everyone in the region to go to the place. You should not miss out on the Abbey on the top of the mountain, as it is the highlight of the visit. You will queue for some time, but after you entered the Abbey people will quickly disperse and it is a joy to be there.

You will have some excellent views over the bay and the rooms in the Abbey are interesting as well. We decided to not visit the other museums on the Mont and instead made a walk around the island during low tide, which was another highlight of the day.

Mont Saint Michel – one of the landmarks of France.

On top of the island, just in front of the main church of the Abbey.

Eating and drinking at Mont Saint Michel is something that can get rather costly, so you might consider to do it the “french way” . A lot of visitors from France had some sandwiches with them and were picnicking at some of the nicest places of the island: next time I will do this, too.

I am sorry about the lack of updates on heartlandeurope.com but as I am working as a journalist in Austria I decided to concentrate on my journalistic work in german. Moreover I run another travel blog in german, together with my wife, which consumes most of my times. She is a great photographer and if you want to see more pictures of our visit to Mont Saint Michel please visit our article at wundrig.at – “Ein Tag am Mont Saint Michel”. You can also find a lot more articles about our holidays in the Bretagne.